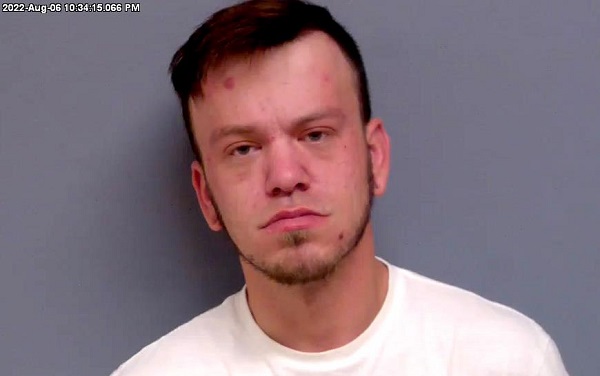 (Stillwater, Okla.)  — A man from Bentonville, Ark., has been jailed on $50,000 bail on Payne County charges of trafficking methamphetamine, driving on a suspended license, obstructing an officer by giving a false name, transporting an open container of an alcoholic beverage, and possessing a marijuana smoking pipe, all in Stillwater.
Steven Brett Norriss, 29, who is on probation for possessing a vehicle in Miami that had been stolen in Pryor, has been ordered to appear in Payne County District Court on Sept. 12 when he can seek a preliminary hearing on his five-count charge.
If convicted of trafficking methamphetamine after a prior felony conviction in Ottawa County, Norriss could be given a prison term ranging from two years to life and a fine of $25,000 to $100,000. If convicted of his other four counts that are misdemeanors, Norriss could be jailed for three and one-half years and fined $2,500.
Norriss was arrested at 6:05 am on Aug. 6 by Stillwater Police Officer Byron Goree, who had just been dispatched on a call of a “possible intoxicated driver heading east on 6th Avenue just passing Kings Street,” that had been swerving over the road and had run several stop signs, an affidavit alleged.
On a traffic stop, Norriss gave a false name and didn’t have a driver’s license in his possession, the affidavit alleged. “I could smell an odor that I associate with burnt marijuana coming from the vehicle,” the officer alleged in his affidavit. Norris said he did not have a medical marijuana card, the affidavit alleged.
“I informed him that because there was an odor of marijuana, we were going to search his vehicle,” the officer alleged in his affidavit.’
Found in the vehicle were 29.6 grams of methamphetamine, nine pills that appeared to be alprazolam, 4.7 grams of marijuana, a marijuana pipe with burnt residue, an open liquor bottle with clear liquid, and an Arkansas ID card for Norriss, the affidavit alleged.
“Dispatch advised that Steven Norriss had several out of state warrants in Arkansas that were non-extraditable and stated that Steven’s license was suspended,” the affidavit alleged.
Asked about the seized items, “Steven told me he knew that they were not the passenger’s, but they were also not his,” the affidavit alleged.